Why Responsibility Outweighs Rank in Japanese Cleaning and Job Culture 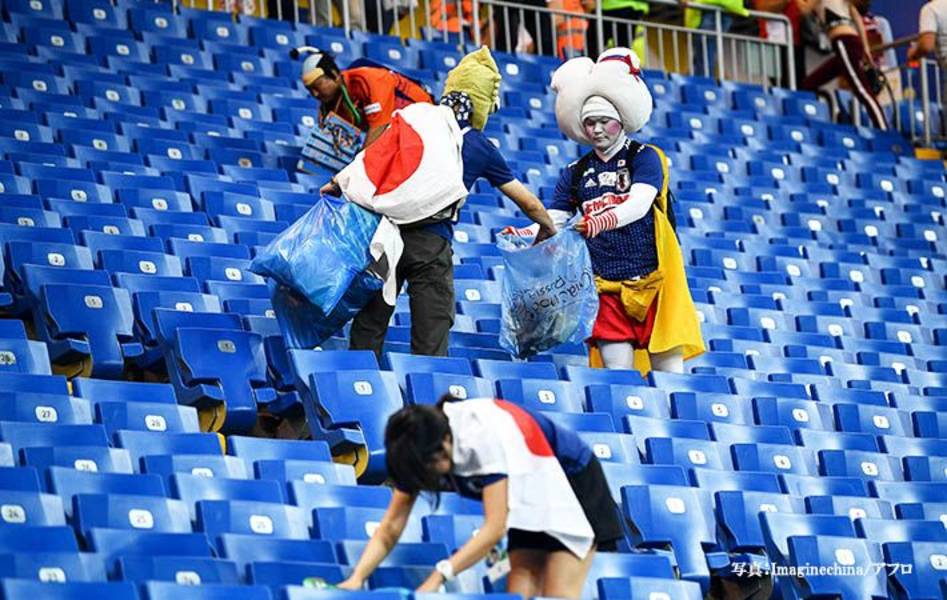 In the first instalment of ‘Myths about Japan Busted!’, we discovered that somewhat contrary to its image as ‘high-tech’, Japan still prefers cash payment over credit card. We also learnt that while Japanese are highly punctual and generally efficient with their time, they strangely persist in archaic paper-laden work practices. We’re further puzzled by their over-zealous use of plastic when we consider how meticulous they are about recycling! Japan’s streets are largely bin-less yet mostly litter-free… amazing! And even though Japan impresses as developed country, she remains poor in her provision of widely accessible, free public Wi-Fi.

But this isn’t all about Japan that’s baffling! Read on to find out why this highly rank-conscious country pays no heed to hierarchy when it comes to cleaning and takes great pride in perfecting the simplest of tasks!

Sportsmanship and the Samurai Blue

When sportsmanship comes to mind, one thinks of fair play and the desirable outcome of healthy conduct irrespective of victory. A good sport is one who has performed to potential and emerges fulfilled by spirit of game. It’s been apparent on one occasion too many, the ire of loss wreaking havoc through fans gone wild, just as arrogance in the wake of a win has often soured its sweetness.

But at Japan’s opening match in the 2018 FIFA World Cup, which saw the Samurai Blue triumph in a challenging feat against the Colombians, Japanese fans at the stadium left an even more indelible mark on the watchful eyes of millions. While they showed no reservation in rejoicing over their country’s win, the Japanese spectators were equally gung-ho in their habitual practice to clean up after their merry-making. Diligently, row by row, with trash bags in tow, they cleared the stands and earned the respect of viewers world-wide that extended far beyond their team’s literal achievement that day.

Japanese humility is steadfast and endures through a culture founded upon collective conscience. There is basic belief that public space is a common good and deserving of respect. It is owned by all and none alike, and therefore a matter of everyone’s responsibility – Japanese or not. This thinking is clearly not confined to the streets of Japan. Rather, it manifests in routinal clean-up anywhere and is entirely independent of one’s place on any scoreboard. Interestingly, this indiscriminate behaviour in cleaning defies even the Japanese preoccupation with rank and file. For the Japanese, cleaning is simply rank-neutral and unashamedly humbling; it is unquestionably their duty, and their way of life.

Japan is notoriously hierarchical but rank-blind with the broom… huh?

In the past, it was caste

It is no secret that Japan is a highly orthodox and deeply stratified society on multiple fronts. This country is obsessed with order and ranking, from its polite and plain forms of speech, to the elaborate procedure of exchanging business cards or meishi, which must respect the chain of command, à la shachō (‘president’) first, then buchō (‘director’ or ‘general manager’), and finally kachō (‘section head’). Possibly unbeknownst to many, rank has existed in Japan in a variety of forms for several centuries now. Rank prevailed in the form of a caste system enforced by the military rule of the Tokugawa Shogunate during the Edo period (1603-1867), when the country was under sakoku, i.e. ‘closed’ or for the most part isolated, from the rest of the world.

As one observes the tiers of the caste hierarchy, a point to note is that even then, the order was intriguing and telling of the Japanese way of thinking: ‘peasants/farmers’, are prized before ‘artisans’ and ‘merchants’; placed high up the ladder and just beneath the powerful ‘warriors’ or ‘samurai’. Why? Because the peasants play a critical and invaluable role of feeding the masses – they are heavily relied on and sacrosanct for the functioning of society, even though they may be poorer in wealth than those who fall below them.

Ranking in the present

Today, rank in Japan is not as overtly expressed as caste but nor is it as obsolete as we’d think it to be. Contemporary ranking features by age – seniority oftentimes prized over merit; and it occurs even more obviously by sex/gender – males/men dominating in a variety of work fields, manner of custom, order of line-up on a class register, etc. Why, even at the recent inauguration ceremony of Japan’s new emperor, female members of the royal family were not allowed within the chambers for the opening half, and in a first, the only female guest in attendance was the one woman in Prime Minister Abe’s Cabinet – Minister Satsuki Katayama. 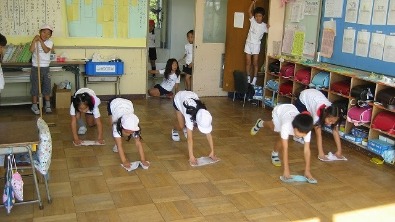 Principal or pupil, everybody cleans

Yet when it comes to cleaning, royalty aside, I had repeatedly witnessed the top-most level of management at the Japanese public schools where I had worked, in the throes of its most unpleasant parts! Take the Head of Staff at my elementary school, for example: he’d be in school earlier than the rest, forking the soil in his tracks, his gloves all muddied and which he’d then shyly use to swipe away a sweaty forehead and wave at me to welcome my arrival for the day. He’d scrub the toilets too, knee-deep in worn Wellingtons, brisk in his actions, not cursory for show. On the occasions when he’d be busy outdoors, I’d sometimes enter the gates to find the Principal right beside him, settled in his vested suit by the foyer, his blazer lying across his lap as he watered the garden preciously planted by the children.

And then there was my high school’s Vice-Principal, who’d quietly take a broom and dustpan to sweep the floor of the teachers' room, while a student stood next to her emptying out the bins during osōji no jikan or ‘cleaning time’ – a daily practice in Japan that typically signals the end of the school day. The Japanese are taught from young to take charge and clean up their surroundings, with school being a primary agent in regulating this code of conduct. Everyone goes about their tasks unencumbered by any notion of stigma that might accompany menial labour elsewhere. One would be hard-pressed to find a janitor in Japanese public institutions like schools – their core occupants deftly taking ownership by maintaining the premises themselves.

It becomes less of a wonder then, how even without bins in sight, Japan's streets are still clean.

In Japan, there’s no job too small

In fact, this mentality extends to explain why, as stratified as Japanese society may be, even the humblest of tasks are performed with an earnest effort to do one’s best. The dignified position of the peasants in yesteryear’s caste paradigm resurfaces in the present as honour in service. It is why Japanese service is world-renowned: cashiers do wonders with gift-wrapping; managers walk you out to their shop’s threshold, holding out the cheapest of buys as a formal transaction that’s met with a bow of both genuine and customary gratitude, almost as if you’ve jammed their register as the millionth customer; and drivers of public transport are dressed in pristinely white gloves, their uniform collars erect with pride to be at your service. So much so that even while they went on strike to protest for greater job security, bus drivers in Okayama did not actively stop working. Instead, they continued to ferry passengers, smartly killing with kindness by not charging anyone!

Their attitude leaves you pleasantly fulfilled about your journey – one that you take routinely and might be bored of but whose monotony doesn’t appear to bear down on the staff who greet with refreshing smiles, day-in-day-out. Careful, the Japanese practice of due diligence is contagious – stay long enough and you might just find beauty in duty so mundane yourself!