Translation and adaptation of Zing!'s article published on 2018/05/14 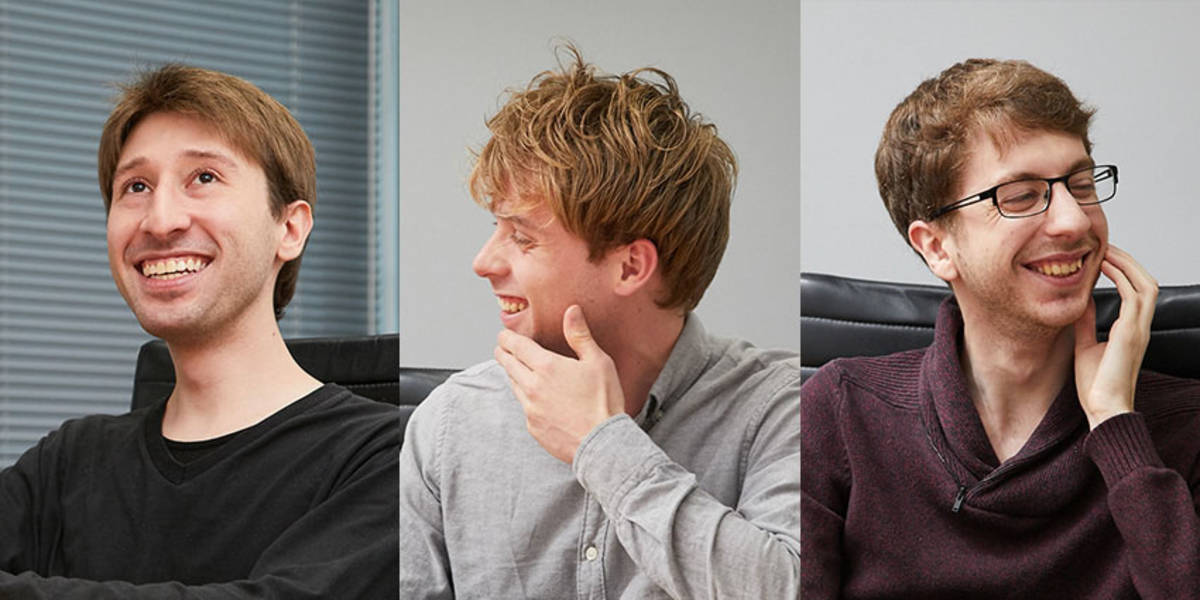 Last month, our team accepted the invitation of Zing! and was featured in a series of interviews about living and working in Japan as a foreigner. Below is a translation of the original Japanese article, which is available here!

Following out first collaboration with Zing, for the second part of our team interview whose theme was "food."

- Do you all cook your own meals?

Rafael: Yes, I cook everyday. When I have time, I often make beef stroganoff and hot dogs.

- Do you cook by yourself?

Rafael: No, I cook with my wife. She is Brazilian too, so we mostly eat Brazilian cuisine.

Thomas: I make pasta and quiches, cakes and crepes.

- Cake and crepes too? You cook well enough! Do you have cooking utensils at home?

Thomas: Nothing fancy, I cook using the ones I am familiar with.

Ruben: Everyone is incredible! I do not cook at all... (laughs)

Ruben: Convenience store and dining out. I often go to "Gusto" and "Bikkuri Donkey", they are close from my home.

- What do you buy at convenience stores?

Ruben: Well, pasta maybe? At noon, I go to the "Family Mart" close to the company. I like mixing raisin bread and fried chicken, it's my signature dish! (laughs)

Thomas: I see him eating this so often (laughs). The "Family Mart" spicy chicken is delicious. It's an easy buy and I really like the taste.

- I see! And do you all go to the supermarket?

Thomas: Yes, I go to various stores such as "Life", "Kansai Super", "Izumiya". Besides these chains, I often go to "Megadonki".

Rafael: I often shop at "Shokuhinkan Apro" as I have one in my neighborhood.

- These are national and Kinki region supermarkets, I feel close! (laughs). Is there any food or seasoning that is difficult to find in Japan, or differences?

Rafael: There are some differences! For example, I think that potatoes taste considerably different in Japan. Mashed potatoes made with Japanese potatoes has a rougher texture, while overseas potatoes are smoother. Even fried potatoes are completely different!

Ruben: I have trouble finding cheese. I have never seen soft cheese from Netherlands in Japan. Cheese and bread.

Thomas: That's right! Japanese bread is soft and sweet, isn't it? I am not a big fan...

- French bread is particular, right? Is there anything close to it in Japan?

Thomas: I have been looking, but I have never seen French bread yet.

-Have your taste changed a little by coming to Japan? Is there any foods you became accustomed to?

Rafael: I like Japanese curry now, it is a taste that do not exist in Brazil. I tasted it at the convenience store for the first time and got addicted since then (laughs). Now, I am going out to eat at various curry specialized restaurants from time to time.

-Is Japanese food familiar in your country?

Thomas: There are some sushi and yakitori restaurants in France. Naturally, the authentic ones in Japan are better!

Rafael: I understand! Brazil also has sushi restaurants, but they are not very tasty. Seasoning and combinations are so wrong, funny sushis come out (laughs).

- Eh! What kind of thing, for example?

Rafael: Cream cheese and strawberry! You think it is a lie, don't you? It is really there, and it is surprisingly expensive (laughs). If you ask the tenants, they would tell you that its a Japanese's favorite!

-I see... I wonder if it actually tastes good! It is another subject but, do you eat snacks while you work?

Rafael: I cannot have an afternoon break without donuts. I like Krispy Kreme Donuts very much, so I buy it before going to work.

-Do you have a favorite restaurant?

Rafael: I like sushi-go-rounds, I go there at least once a week.

Thomas: I am also a sushi lover! I go to an authentic sushi-go-round restaurant in the Nihonbashi area (Osaka).

- Sushi is popular! Next, I would ask about your local cuisine. Is there a restaurant in Japan where you can eat some dishes from your home country?

Rafael: There are plenty of Brazilian cuisine restaurant in Japan, it is still a bit different from home. But the one near the Utsubo park (in Osaka) is pretty full-flavored.

Ruben: There are few Dutch cuisine's restaurant. I think that the waffles at "Wafelhuis" near Rokko Station (Osaka) are delicious!

- Thomas, how about French cuisine in Japan?

Thomas: Japanese French cuisine is too expensive (laughs). Typical French restaurants are quite different from the ones in Japan.

-I see. Finally it is difficult to find the tastes of your home in Japan, but it seems that everyone is enjoying their own eating habits!

Along with traditional Japanese food, curry and yakitori is also popular among foreigners... and so are convenience stores!

Next time, we will talk about housing!