Translation and adaptation of Zing!'s article published on 2018/04/13 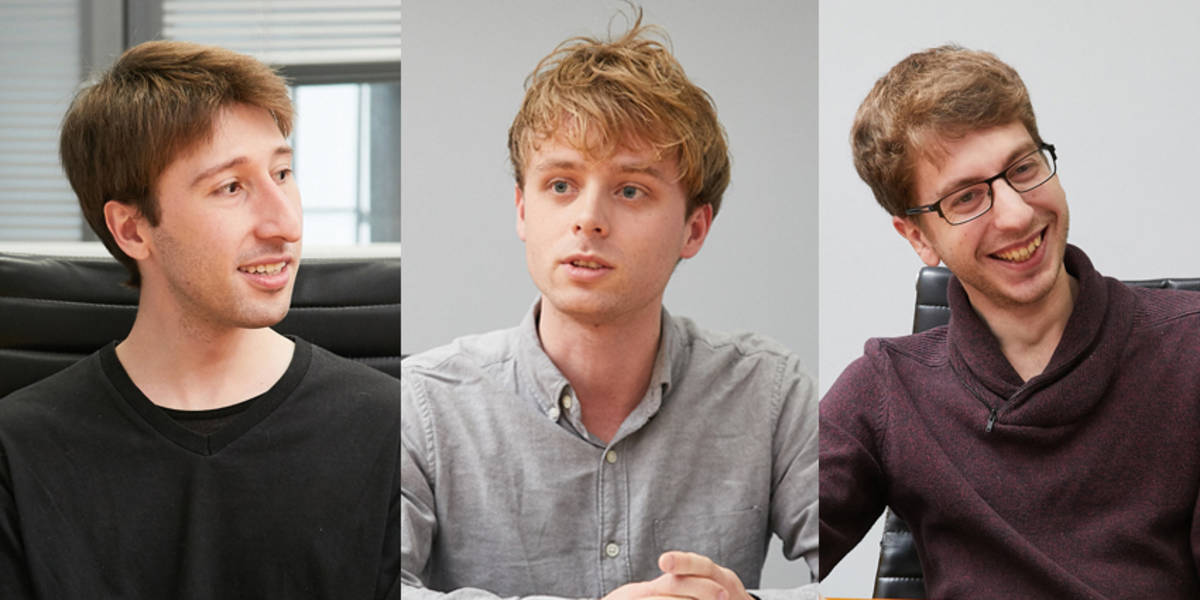 Last month, our team accepted the invitation of Zing! and was featured in a series of interviews about living and working in Japan as a foreigner. Below is a translation of the original Japanese article, which is available here!

For a few years now, the tourism in Japan is flourishing and so is the number of foreign workers. Their number has actually risen over 1.2 million persons (according to the Ministry of Health, Labor, and Welfare in 2017).

Active Gaming Media Inc. (AGM) is, beside a game developer and publisher, a localization company. Its Osaka headquarters gather not less than 31 different nationalities! This time, the interviewees were the team dedicated to the development of IZANAU, which is as you know a matching site connecting talents from overseas to Japanese companies. Let us introduce you to Rafael, Ruben, and Thomas from Osaka's HQ and Helene, from the Tokyo office.

The first topic of the series of three articles is clothing and fashion!

Rafael: I'm Rafael, from Brazil. I work as Digital Designer and I manage IZANAU's UI and UX, as well as the website's design.

Ruben: I'm Ruben and I am from the Netherlands. I work as a Back-End Engineer.

Thomas: I'm Thomas from France. I am Back-End Engineer too.

Helene: I'm Helene and I'm French too. I'm the Project Manager for IZANAU. I oversee coordination between each team working on the project and make it to the next level.

- Have you been working in the same field before coming to Japan?

Rafael: Yes, Thomas and I had been doing similar jobs in the past in our home countries.

Ruben: I came working at AGM as first as an intern when I was a college student in the Netherlands. I really enjoyed the company and I got a job here after graduating.

- Can you tell us more about IZANAU?

Rafael: It is a matching site that connects foreigners who want to work in Japan to Japanese companies...

Thomas: ...and in addition to job offers, we also post contents with information about work in Japan, advice and news.

Ruben: The site has been designed to be easy to use. Sometimes, it is difficult to find a job that matches your expectations, and all the paperwork can be very dissuasive. At IZANAU, we put efforts to alleviate these obstacles.

-I see. So, you use your experience in your work!

Rafael: Exactly. I think this site would be VERY useful when I first arrived in Japan! (laughs) We aim at becoming a reference for non-native people looking for jobs in Japan.

-Jumping to the next topic, I would like to know more about the real life of Foreigners working in Japan. Let's start with Fashion. Where are you buying your own clothes?

Rafael: I wear budget-friendly, functional clothes and actually, I don't care much about it. I pick up my clothes from UNIQLO and GU, which offers high quality but is still relatively cheap.

Thomas: I am an UNIQLO aficionado! Any other clothes I wear are from H&M.

Helene: In small shops and department stores! I avoid buying clothes on the internet, as I like chatting with the clerk and touch the fabric. For Japanese brands, I like "TSUMORI CHISATO"' and bought some pieces on special occasions. Although it is expensive, I would like to purchase pieces from "COMME DES GARCONS" or "YOHJI YAMAMOTO". I would match them with ordinary pair of jeans or simple tops... from UNIQLO!

Ruben: I have no place in particular to shop but, as it is close from home, I go to Namba Parks and UNIQLO.

- I see. UNIQLO is popular!

Rafael: I think UNIQLO is literally everywhere and it is so convenient!

Ruben: Yes. And compared to the Netherlands, I was surprised that there were so many stores in Japan!

Thomas: UNIQLO but also all the other Japanese apparel makers have a reputation for making high-quality products, design and fabric, even at low price.

-Did you feel a difference in fashion, compared to your home country?

Thomas: I do not feel a big difference with France. My hometown is in the countryside near Bordeaux, famous for its wine, but the shops there are similar to the one I can find in Japan.

Rafael: It is a very precise pinpoint, but TIMBERLAND boots are cheaper compared to Brazil. As there are fewer shops there, it is expensive and hard to get.

Ruben: I felt a gap in how people dress. When I compare how women dresses in the Netherlands and in Japan, I feel that Japanese women have cuter outfits while, in my home country, women give a dressier impression. They wear mainly jackets and blouses.

Helene: I felt it personally. While living in France, I was wearing tops showing more skin but I don't wear them anymore. Maybe there is the influence of my age as well (laughs) but there is no doubt that cultural differences are at play.

- I see. By the way, is there anyone in the office who has a particular style?

All: Undoubtedly, Sawa san (Media Department Manager)! There are many fashionable employees but Sawa san's hair is unique!

As a conclusion, UNIQLO seems to be the top popular brand among foreigners who work in AGM.... and maybe in Japan!

Next time, we will talk about food, we hope to see you soon!