Racism Denial: The Case of Japan

Is Japan ready to admit that racism is not just a foreign problem? 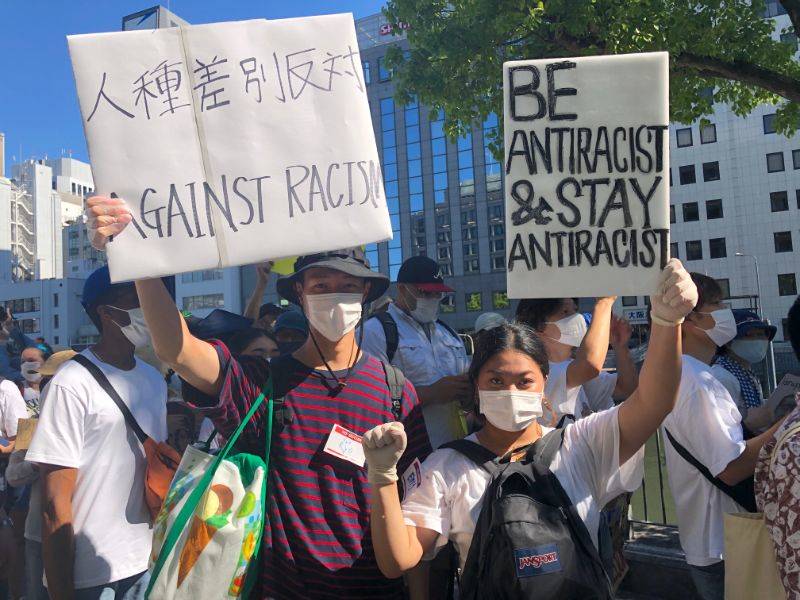 The killing of George Floyd on May 25th by a police officer in the United States sparked a global outcry against racism, with protesters marching in the streets calling for an end to police brutality and racial injustice. This anger and frustration reached Japan, with Black Lives Matter (BLM) protests taking place around Japan, where protestors voiced their exasperation at the sloth-like pace of institutional change. Enough is enough they seemed to say. And yet, the question remains: Has the call to tackle racism been heard in Japan or did it simply fall on deaf ears?

In 2013, film director and former English teacher Miki Dezaki created a Youtube video titled “Racism in Japan”, where he revealed the majority of his high school students thought that racism and discrimination were American problems and not an issue in Japan. He attributed this lack of awareness to how the news media in Japan mainly focuses on reporting incidents of racism in the United States, and how the Japanese school curriculum does not encourage discussion of the issue. Given the well documented discrimination that zainichi Koreans, Burakumin, Okinawans, and the Ainu face in Japanese society, he explained how it is important to raise awareness, especially among the youth. As such, Dezaki suggested the implementation of a school program that teaches racism and discrimination in Japan. However, a few weeks later, Dezaki posted a second video, where he opened up about the harassment he received from Japanese right-wing nationalists and their demands that he take down his previous video. He ultimately refused to do so, and reiterated his belief in the importance of open discussion.

The difficulty of teaching “anti-racism” in Japan is also well documented by viral TikToker Patrick Smith, otherwise known as “thepaperpat”. In short comedic videos, Smith describes his experiences as a Black English teacher in Japan. In a TikTok video with approximately 2300 likes, Smith describes an incident where one of his students called his face “dirty”. Rather than getting angry, Smith uses such incidents as opportunities for open discussion, listening to his students before giving them an explanation of “melanin” for differences in skin color. He understands how Japanese children are not used to seeing people who look different from them, and hopes to contribute to the effort of eliminating misconceptions about race in Japan.

Portrayals of Race in Japan

Japan is largely considered to be a homogenous society with little knowledge or experience with racism or discrimination. This was advertised globally when a clip from an NHK series covering the BLM protests in the United States was criticized for being tone deaf and racist, for its caricatures of the protestors as muscular, angry, and violent Black people, rather than as a diverse set of people who were seeking social reform. Similar critiques of insensitivity occurred in the past, notably with the issue of “blackface” and the “whitewashing” of Tennis player Naomi Osaka in a Nissin food commercial.

Last year, the number of foreign residents in Japan hit a record high of 2.82 million, with many being technical interns and workers coming to fill the country’s labor shortages; the number of foreign students were also significant. This prompted Menju Toshihiro, managing director of the Japan Center for International Exchange, to ask whether or not Japan can adapt to embrace multiculturalism. Although he saw discrimination and the Japanese language as significant barriers, his analysis ended on a hopeful note, citing the success of the multinational, racially diverse Japanese rugby team in the 2019 world cup, where their motto of “One Team” can be used as a role model for overcoming differences to achieve a common goal.

The March Against Racism in Japan

The BLM protests drew the largest crowds in Tokyo, with an estimated 3,500 participants. It was organized by Sierra Todd, a student at Temple University Japan. She wanted the march to serve as an outlet for people who felt distressed by racial injustice. Compared to the tens of thousands who marched in the streets of cities such as New York or London, the gathering in Tokyo appears meager; yet, it is still an attempt begin a conversation about inherent bias, racism and discrimination in Japan. But of course the naysayers responded with fervor as well. An interview with Todd posted on Youtube gathered comments written in Japanese that expressed anger and disbelief, not in solidarity against racism, but at the protest itself. The belief that racism does not exist in Japan persisted in the comments; others, stressed from the COVID-19 pandemic, called the protest a health hazard because there was no social distancing, and pointed out that it went against the call to stay home to curb the spread of the virus.

What becomes clear is that racism and discrimination obviously exists in Japan as it does everywhere, and while there are efforts to make it a topic more open to discussion, it largely remains overshadowed by the idea that it is a “foreign” problem. The government’s megar attempts to address the problem by “regulating” (without consequence) hate speech, there is no sense of urgency to even acknowledge there is a problem. Some community driven examples of change exist at the local level, with the city of Kobe issuing a city ordinance that aims to eliminate discrimination against foreign nationals and creating a more inclusive society. But once again the parameters are vague and the effects are unclear. Presently, concerns over COVID-19 have taken priority, and it remains to be seen whether Japan’s desperate need for foreign labor will shift the society to embrace diversity in the future.

My colleague Hugo Clark and Nerea Inamar have also written articles on the topic of racism in Japan for those interested.