[Op-Ed] The Unchecked Wonders of Small Town Life in Japan

It’s not all ‘Tokyo’

Japan is vast country and internally greatly diverse. Be charmed by the unexpected ways of small town life, both the strange and endearing, as you prepare to venture beyond the capital.

Get comfortable on the subway and patiently make the commute to the quieter suburbs of the great Tokyo Metropolis. Ride to the adjacent wards of Koto or Edogawa, or perhaps to the northern-flung Taito district, and you’ll realize, that the pace of time and life both appear to slow down. In fact, across the occasional junction, they might even U-turn into yesteryear.

My Japanese friend obliged and came out towards Minami-Senju – a penultimate stop on the Hibiya Line, to meet me for a coffee recently. She swiped a glance around us and observed – “this is what we call shita machi”.

“Downtown?” I translated literally, puzzled because we were anything but.

“Casual culture. This is not Ginza Tokyo.”

Casual culture – where you’ll find smokers cross-legged and locked in conversation on the pavement; where stepping out in the morning you’re greeted with a scene lost in time: that of an old man engrossed in his newspaper on his doorstep, shirt crinkled and unbuttoned, singlet shamelessly exposed; where the corner supermarket is a node to gather for the regular catch-up; where punks headstand in competition for the night’s dose of fun, while the fat rodent watches on – prince of the sidewalk that he is.

I got ahold of a book once, somewhat out of place on the shelves of my university library. It was a collection of columns by Don Maloney, a writer for The Japan Times in the 1970s. Its title was hilarious and therefore irresistible. It read – ‘Japan: It’s not all Raw Fish’.

I never finished reading the book but I’d combed enough pages to appreciate Maloney’s slant, which reaffirms much of popular impression about Japan with great punch and wit but therein also catches its reader unarmed, coaxing them off-trail into the wonders of the unknown.

And so I urge you to explore what lies beyond the gloss and glamour of ‘Ginza Tokyo’.  Head away from the glare of neon billboards and rowdy crowds, and traverse even the charming suburbs – dare greatly to walk right into the pitch darkness and accompany the silence of unlit rural crossings. Or drive through the uneven tar separating endless paddy fields of green, where a run-in between a jerky car and an aimless boar is perhaps your greatest safety hazard and loudest noise pollutant. And the mountain range that surrounds you, foreboding in silhouette, your most giant muse for a horrific appetite. Unless of course, you’re lucky enough to find a viper coiled in a death-grip possession of your mamachari two-wheeler.  Either way, you best be walking.

The likes of Japan-Talk and other wanderlust sites that promote lesser known parts of the country, hinge on attractions of tourism – natural wonders of a gorge or waterfall, or on the marvels of man-made structures, a historic jinja (‘shrine’) for instance. This is a great way to start but consider also the latent charm of the uneventful ordinary. This is what the inaka life offers you, inaka being ‘countryside’ or ‘village’. 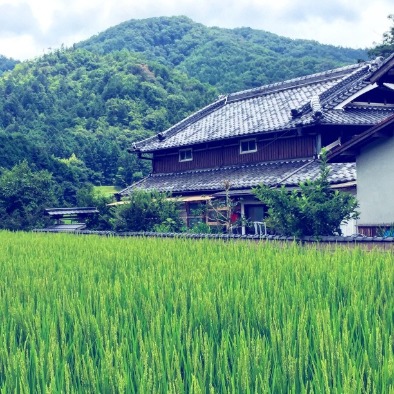 In the magical pottery town of Hasami, in the outskirts of Nagasaki, town-wide chimes go off thrice a day – at 8am, 12noon and 5pm. Each household is fitted with a speaker through which evening announcements project vital information – about the upcoming local matsuri (‘festival’) for example, or a warning of impending floods and reminder of the evacuation route, or simply that the dates for the recycling truck’s visit are rescheduled for the month. The town is kept on par in unison, all 15,000 members.

Transportation in small town Japan is best managed with autonomy – get yourself a car or get on that bicycle and exercise those quads! Buses are punctual but infrequent to one every hour and a half, skipping out square portions of weekday afternoons since the majority of their patrons are still in class. Not all towns have a train station – Hasami being one of them –, so some advanced planning to coordinate between the infrequent bus timings and train schedule will greatly reduce your waiting time. Your best friend here is Hyperdia, the trusty route-planning website.

Other forms of access or rather, the lack thereof, motivate lengths of strolling to get to one’s destination. Missing the bus can mean a two-hour walk to get lunch or cycling roundabout an entire hectare of wetland for that quick cup of coffee at the nearest conbini, which ironically makes for a less than convenient convenience store experience. What it does do, is teach patience and warrant a more careful consideration of needs over wants.

Similarly, many smaller towns have just the one centralized supermarket, Daiso outlet and mega drug store, with limited options for most items. Half a year in as a countryside resident makes for a befuddled visitor to the overwhelming big city next door, its surge of variety more off-putting than enticing. You then slowly begin to understand substantively the adage of less is more.

Your initiative to speak their language will also be most heartily acknowledged with a “nihongo jōzu desu ne!” (“Your Japanese is good!”).

The simplicity of small town life sits at the heart of its charm and extends outwards in a reassuring bundle of communal ties that graciously accepts even the outlying foreigner. Certainly there are the stares that linger on towards the odd-looking gaikokujin (‘foreigner’) but try breaking it with a smile and a quick head-tilt, express a greeting or aisatsu – a simple ‘konnichiwa’ will do, and the struggle to digest the unfamiliar for the quaint resident of the town is likely to ease into a smile in return. Your initiative to speak their language will also be most heartily acknowledged with a “nihongo jōzu desu ne!” (“Your Japanese is good!”).

It is also highly possible, what with the scarcity of human resources in such small communities, that the town’s electrician or denkiya-san doubles up as the cameraman for the town’s schools’ sports days. There is a chance too that he generously gives his time to come over and fix your internet woes, leaving you with an invitation to join him at the local jazz pub for a hearty cuppa joe over the melodious turns of a Blue Note label on the master’s gramophone. How can one resist?

A community centre across the lone public high school typically acts as the social epicentre of small towns, many with a disproportionate number of elderly. In agricultural Hasami and even in mid-sized towns like Ōmura – home to Nagasaki’s airport and the glistening beauty that is Ōmura wan (Ōmura bay), townsfolk nurture vegetable gardens for personal subsistence, oftentimes gifting chemical-free produce to neighbours when seasonal harvests are ready for the taking.

There’s no mistaking the cycle of dawn to dusk in the unencumbered landscape, with black specs of sparrows fluttering into the horizon – a mesmerizing sight to behold of its own. And with the street lights likely to go off by midnight, your mobile phone morphs into a torch to guide you up the stairs of your modest two-storey housing unit. Careful now, should it be during tsuyu months (‘rainy season’), little toads line the railing in ribbits of joy.