Japan's reliance on coal is unsustainable, but do they actually have viable solutions for change? 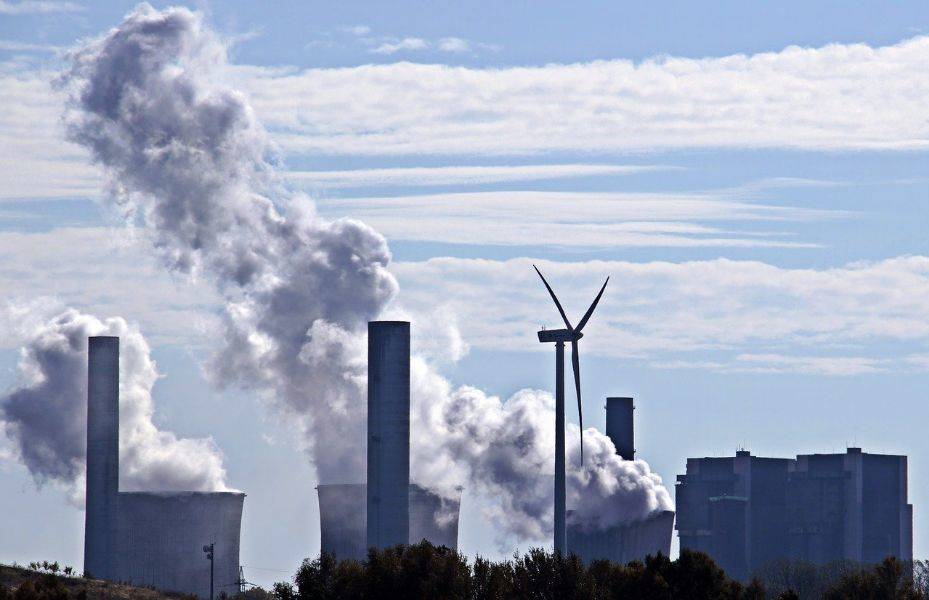 The Japanese government announced on July 2nd, 2020 that it plans to shut down 100 inefficient coal-fired power plants by fiscal 2030 in favor of renewable energy and nuclear energy. While the government's plan to phase out coal in the future comes as a welcome move, relying on nuclear energy as an alternative raises safety concerns given the lingering memories of the 2011 Fukushima Nuclear Disaster. Switching from coal to nuclear energy simply replaces one problem with another, and renewable energy at present remains too costly to be viable as a sole solution to the reduction of coal use. Also problematic is a process called “thermal recycling”, which generates energy from burning plastic waste. With climate change suspected of causing record-breaking rains and floods, it is no longer possible to delay thinking about Japan's energy present and future in terms of security and sustainability.

Concerns over climate change have prompted countries around the world to do what they can to cut back on greenhouse gas emissions. Coal burning is responsible for 46 percent of carbon dioxide emissions worldwide, and is the biggest contributor to climate change. And yet, Japan has continued to rely on coal as a cheap source of energy. This is because the Ministry of Economy, Trade, and Industry (METI), a key player in decisions over Japan’s energy policies, prioritizes the economy over the environment. Evidence of this can be found in how Japan exports coal technology and power plants to Southeast Asia, despite Japan’s (alleged) commitment to meeting the goals of the 2015 Paris Agreement. This has drawn international criticism from climate activists, with protestors in Pikachu costumes gathering in front of the venue for the 2019 United Nations climate meeting in Madrid, chanting for an end to coal financing. In response to such criticisms, the Environment Minister, Shinjiro Koizumi, said “A growing number of people in Japan, including myself, believe future climate actions must be taken.” The announcement on July 2nd echoed his sentiments, but it was not enough. Independent research organizations like The Climate Action Tracker have said “Japan’s reported plans to shut a number of coal plants will make little to no difference in emissions in 2030 compared with its current Paris Agreement target.”

Japan is also the world's third largest coal importer, and the majority of it comes from Australia, another country that is struggling with ending its reliance on coal. Those who oppose shifting to renewables, like utilities and heavy industries, have argued that the safety, security, and stability of coal and natural gas outweigh the benefits of renewable energy. This belief in the safety of coal plants in Japan may stem from its usage of ultra-supercritical boilers that are more energy efficient and less polluting compared to older technology. But these newer coal plants still release greenhouse gases into the atmosphere, and the security and stability of coal will be short-lived; according to the Millennium Alliance for Humanity and the Biosphere (MAHB), coal will run out globally by the year 2090.

For long-time residents of Japan, it is no secret that plastic is used everywhere. All manner of goods come individually wrapped in multiple layers, making the eventual task of sorting the household trash a mind-numbing affair. But surely this effort is put to good use; Japan boasts that 89 percent of its waste is recycled. A closer look reveals the truth: 58 percent of Japan’s plastic waste is burned to produce heat and electricity via a process known as “thermal recycling”, which emits carbon dioxide into the atmosphere. Another 14 percent is exported to neighboring Asian countries, and only the remaining 14 percent is actually recycled. 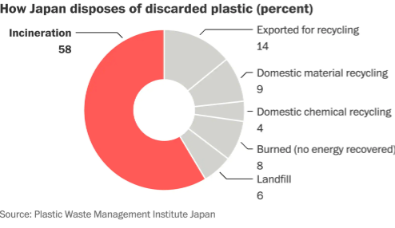 Japan produces around 9 million tons of plastic waste annually, and about 1.5 million tons are exported. China was the main recipient, importing around 60 to 70 percent. They did this because recycling plastic waste appeared to be a cheap alternative to making plastic from oil. Unfortunately, most of the waste they received was too contaminated to recycle, and in 2017, the Chinese government announced that it would cease importing plastic waste. Other neighboring Asian countries, like Taiwan, Malaysia, and Thailand have also begun reducing the amount of waste they import. This has left Japan’s plastic waste with nowhere to go.

On July 1st, in a bid to reduce its plastic waste, the Japanese government introduced a nationwide system that requires retail shops to charge a small fee for plastic bags. Environmental experts, however, have questioned the effectiveness of this approach, as plastic bags only account for 2 percent of Japan’s 9 million tons of plastic waste. Furthermore, “environmentally friendly” bioplastic bags that use more than 25 percent of plant-derived materials are exempt from the new regulations, worrying environmental experts, as these products, when burned, still emit gases that contribute to climate change. Concerns over COVID-19 infections have also prompted many to use disposable plastics instead of reusable bags.

In 2011, 54 nuclear reactors were in operation, providing around 30 percent of Japan’s electric power. Plans were made to increase this number in the future, but this changed drastically after the Great East Japan Earthquake and the following nuclear disaster in Fukushima. Although nine years have passed since then, 40,000 people still remain displaced. Presently, only nine out of 54 nuclear reactors have resumed operations after stricter safety measures were implemented, and 21 reactors have been put under review for decommissioning in consideration of refurbishment costs.

According to a study by Atsuko Kitada at the Institute of Social Research, negative perceptions of nuclear power rose to 70 percent from a previous statistic of 20-30 percent, but around 60 percent of people also found the use of nuclear power as inevitable given how expensive renewable energy is. Arguments have also been made in favor of nuclear energy as a way to reduce Japan’s reliance on coal. But, there is also the question of where the nuclear waste is to be stored. Suttsu, a town in Hokkaido, has recently become the grounds for a heated debate on this topic, with Mayor Haruo Kataoka thinking about participating in a survey towards the construction of a nuclear waste facility. Monetary incentives were made clear, as participating municipalities may receive up to 2 billion yen ($18.8 million) from the national government. In contrast to the Mayor, Hokkaido Governor Naomichi Suzuki opposed the idea and criticized the cash offer, saying "The national government is basically shoving wads of cash in our face".

Japan’s energy policies play a vital role in reducing the impact of climate change, but the government's economic concerns have taken priority over protecting the environment. This runs counter to the message conveyed in the so-called guiding principles of the Tokyo 2020 Olympics: “Be better, together – for the planet and the people”. Although the Olympics have been postponed due to COVID-19, the event still provides an international venue placing Japan in the spotlight. It remains uncertain whether or not these guiding principles are simply empty words, but it would take a great many changes for it to seem otherwise.