Pay your taxes and don’t steal a bike. 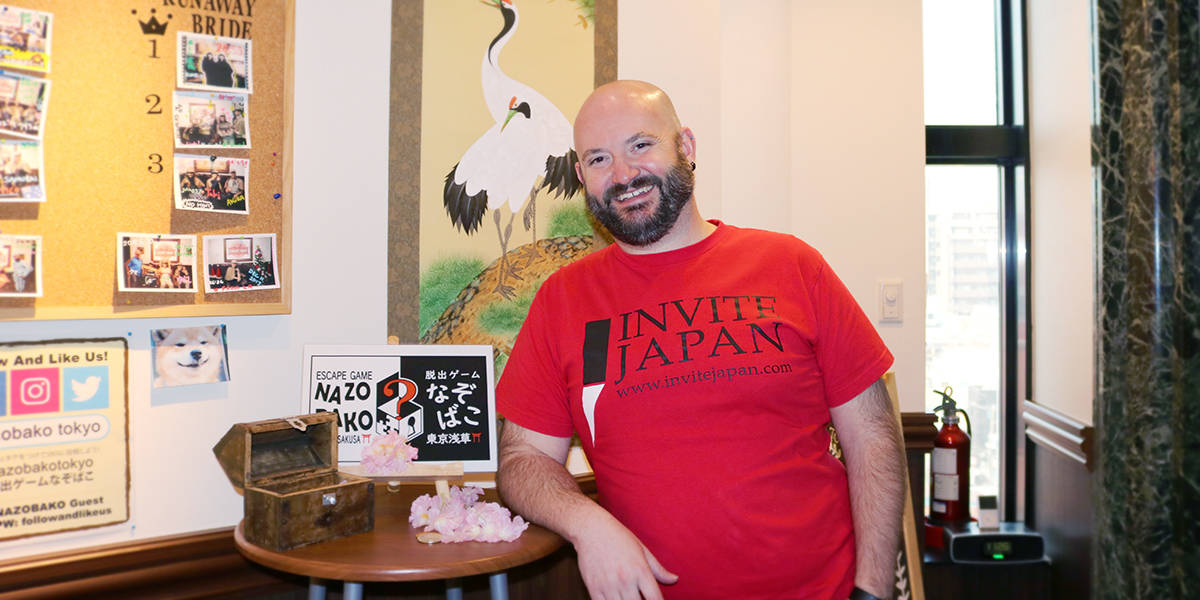 Settling in a new country, as thrilling as it can be, is also a hard decision to take without any advice!

We decided to look for the information at its source and share with you interviews introducing Foreigners working and living in Japan and succeeding in what they love to do. When we visited Nazobako and learn more about Escape Games, we took the chance to dig further into the Japanese life of their charismatic manager, Dennis Oliver.

Living in Japan since 1996, this American citizen enthusiastically shared his experience and advice to newcomers in Japan.

IZANAU Team: Why did you come to Japan for the first time?

Dennis: I finished university and, at the time, Japan was a place you could go, teach English, get a job and start paying off your student loans quite quickly... and then I moved to Tokyo, and fell in love with Tokyo. I met my husband and I’ve just been here ever since. It’s just a great city and place to live! At this point I have lived here for so long, more than in America that’s for sure.
I remember I met someone, at the time I had been only here for a month or two, and I said that I was planning to stay maybe for 3 or 4 years. She laughed “I’m sure you will be here for at least 10”. That was because people who come here for six months stay for three years, and so anyone who plans to stay here for three years...hmmm gonna be here for a while.

I: How much did you know about Japan at that time?

D: I moved here at a time when there was very little internet, but I did move here with a support system.
The company that I worked with had an international environment and I probably didn’t outreach into the Japanese community and culture as much as I should have.
Now, people know about Japan through comic books, through culture, and it has really gotten out into the world. In 1996, when I moved here, coming to Japan was still quite exotic. It was a very far away place, I didn't come here with a lot of experience about Japanese pop culture. I think that moving here now is a lot easier, a lot more fun and a lot more rewarding. At the time it was like moving to another planet! I was just incredibly different. I think people move here now because they really love Japan... but in my case, I didn’t.

I: Did you see this move more like an opportunity?

D: Yes, it was an opportunity to travel all over Asia, using Japan as a base for getting a good solid job. I didn’t move here for Japanese culture or for my Japanese skills. I met my husband 6 months after I got there and was like “Baby, please read this for me”.

I: So I guess you learned Japanese just along the way?

D: Yes, just kind of along the way. I didn’t studied, my Japanese is still quite poor. Speaking Japanese is definitely a goal that you can have here, but everyone has their own experience and everyone has gotten through their own way. This is definitely not a place where you can just hang out and do nothing. If you want to mess around, go somewhere else. This is not that country! (laughs)
There is a lot of people here because of English language or because they are studying Japanese, but if you are here for a particular skill and Japanese happens to be around that, then Japanese doesn’t need to be the core skill. I think a lot of people, for a long time, were only here either because of English or because of Japanese and language skill was the main reason. I think there are more opportunities now to come here and do something else. Japanese and language skills are a part of the toolkit that you have.
Language is one tool. It's not the core value of why you are here. It may be for many people, and that is wonderful, but I do think people looking for a career in Japan have to make sure to bring something else. Bring some experience and some passion and something else to the table.

I: How did you get your jobs?

D: Japan is a great place to develop amazing hobbies and hobbies can sometimes turn into jobs. That was where DJing work came from, and eventually, I did it as a full-time job. I lived from it, I paid my rent from it and I did so for several years. The reason to improve your Japanese is that there is all this great information. If you are here and interested about something, there is a ton of information out there. So you end up learning Japanese not because you want to learn Japanese, but because you want to learn about your hobby. And by starting doing things, you get into interesting jobs.

I: How did you end up managing an Escape Game?

I have worked from my previous job for 10 years, and I was considering looking for something else.
At the time this facility was looking for somebody, so it was just the right time, the right place. I guess the lesson here is to stay open and put yourself out there, while still doing good work. Don’t burn bridges. This is basic information for anyone who is starting their career but when you do change jobs, whatever new opportunities present themselves, don’t be messy.
Having a very good work ethic will do much more for you in this country than any other skill.

I: What would you be your advice to newcomers in Japan?

D: Pay your taxes. When I got here there, people around were like "oh you don’t have to pay your city taxes, they are only going to hand in 2 or 3 years... but if you move, it doesn't matter." It does matter.
You’re living here, it’s a good society to live in when natural disasters come you will be probably ok, you are living in a safe society... all this kind of positive things are part of coming here, so pay your taxes.
I understand that some people are coming here to experience Japan for a year or something, and that’s fine... but in that year, you’d never know who you might meet or what kind of opportunity comes up. Coming and committing to where you live is a good policy.
Not treating the place like it’s a hotel room. I think that treating this country well is just good karma in a way.

I: Anything that you would say maybe to your old-self, something you wish you have done?

D: Learn Japanese... after all of my "oh no it’s fine!". Be curious about Japanese.
That was my fault, I just wasn’t curious as I should have been and, in my first year, I learned how to get around it. Why would I learn the words for small beer? I only need a large beer! Technology has caught up with it, now I use Japanese in my daily business...but it is something that I would've been better do as a young person.
There are just so many cultural norms here that you won’t discover if you don’t keep silent for a while and just listen. Stay humble.